DE – Sam Williams, Ole Miss — second in the SEC with 13 sacks (School record), leads the SEC with 4 forced fumbles, 3rd in the SEC in tackles for loss with 15; had a sack in 9 of his final 12 games for Ole Miss

DL – Jordan Davis, Georgia — finalist for the Outland Trophy, Bronko Nagurski Trophy and Chuck Bednarik Award; has played in all 13 games, starting at DL in 12, and has 28 total tackles…3.5 of those are for lost yardage, including 2.0 QB sacks

LB – Will Anderson Jr., Alabama — led the nation with 16 sacks; national leader in tackles for loss with 30.5; finalist for the Bednarik Award and Nagurski Trophy; SEC Defensive Player of the Week honors for his efforts against Florida, Ole Miss, Mississippi State, LSU and Auburn

LB – Damone Clark, LSU — led the nation with 136 tackles (16 more than next candidate), FInalist for Butkus Award; 19 tackles vs Ole Miss; 9.5 tackles for loss and 3 sacks; SEC Defensive Player of the Week at Mississippi St.; wore #18 for LSU this season

LB – Nakobe Dean, Georgia — won Butkus Award; recognized as the nation’s top collegiate linebacker; semifinalists for the 2021 Chuck Bednarik Award, given to the outstanding defensive player of the year; leads the team in tackles for loss with 8.5 and is tied for team lead with 5.0 QB sacks.

S – Jaylan Foster, South Carolina — 86 tackles, including a career-high 13 stops against Tennessee, and is tied for the NCAA lead with five interceptions; semifinalists for the Jim Thorpe Award 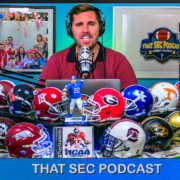 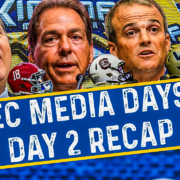 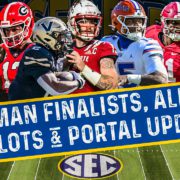 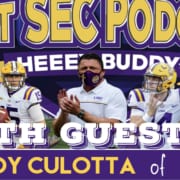 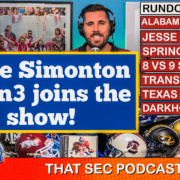 Third Saturday in October still a rivalry? Jesse Simonton SEC insider for On3 joins the show! 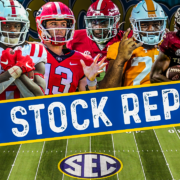 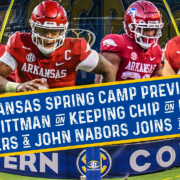 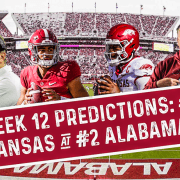